This also applies to cable, chain, and webbing.

A "bight" is a simple loop in a rope that does not cross itself.

A "bend" is a knot that joins two ropes together. Bends can only be attached to the end of a rope.

A "hitch" is a type of knot that must be tied around another object.

The "Safety Factor" is the ratio between the gear's breaking strength and the maximum load applied to the gear (e.g., 5:1).

This page explains how to use Adobe Photoshop to create images for use in vRigger's Gear Builder. The instructions should also apply to the less expensive Photoshop Elements software, but they were written using Photoshop 2021.


Photoshop is a powerful, yet undeniably complex, software program. Refer to Photoshop's Help for more information.

1. Obtain a digital image of the gear

You will need a digital image of the gear that you want to add to vRigger. In many cases you will be able to find an image on the internet (e.g., try Google's Image Search). If you do use an image from the internet, make sure that you don't violate copyright laws.

Look for a picture that:

If you photograph the gear yourself:

2. Crop the image in Photoshop 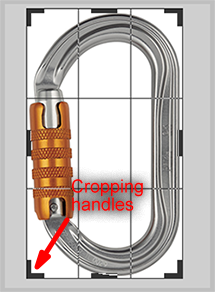 3. Unlock and rename the background layer 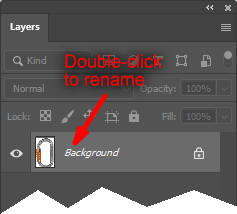 (This step will remove the padlock from the layer and allow you to edit the image.)

The next task is to erase everything except the gear image. If your image file already has a transparent background, great! You can jump to step 5.

The following instructions explain several Photoshop tools that you can use to erase the background. The eraser tool is probably the easiest, although some of the other tools are more powerful. Note that these instructions summarize complex Photoshop commands—please refer to Photoshop's Help for details.

You should be familiar with the following Photoshop commands:

The goal is to erase everything on the Gear layer except the gear itself. Take your time, be careful, and zoom in very tight. Undo your changes if they aren't perfect. 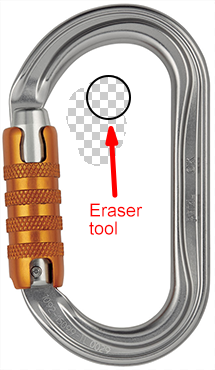 The eraser is the easiest of these Photoshop tools. It works well if your image is very large so you can zoom in on the gear.

To accurately use the eraser, you should zoom in extremely close (i.e., press "+"). You should be zoomed in much closer than the example shown here. This will make it easier to precisely move the eraser along the edge of the gear. If you make a mistake and erase part of the gear, even a tiny part, select Undo and try again.

The magic wand is a powerful Photoshop tool. It is the tool we use if the gear is on a solid background (e.g., on a pure white background as with this carabiner).

The magic wand is an awesome tool, but be careful. If the Tolerance is set too high, you may accidentally select part of your gear. If it is set too low, some crucial areas where the gear and background meet won't be erased. We suggest that you only use the magic wand when the background is very homogeneous (because it is quick), and use the eraser or lasso on more complex backgrounds.

Although the polygonal lasso selects using straight lines, it is extremely effective and can be used on curved gear. 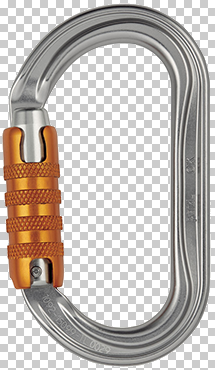 Confirm that the background is erased.

After erasing the background, your gear should look similar to this, with only the gear and Photoshop's checkerboard background displayed.

5. Save the file as a psd (Photoshop) file

Now is a good time to save the image as a Photoshop (psd) file. This will be helpful if you need to edit it later.

The following steps remove the transparent area outside of the gear.

Choosing the optimum image size can be difficult, because rigging illustrations look best when some items, like people and tripods, are smaller than they are in the real world. We use the following general guidelines.

For most handheld gear, multiply the length of the gear in inches by 50. For example, if a carabiner is 3 inches long, the image should be 150 pixels long. When you create the gear using vRigger's Gear Builder, you should then set the "reduce the image size" option to 75 percent. We use this method for almost all gear.

For handheld fire gear, like nozzles, follow these same steps but use 25 pixels per inch. For example, if a nozzle is 8 inches long, the image should be 200 pixels long. When you create the gear using vRigger's Gear Builder, again set the "reduce the image size" option to 75 percent.

We treat larger items, like people and tripods, differently so the image files don't get too large. This is more subjective than for handheld gear, but in general we avoid having either dimension be greater than 900 pixels.

For people, multiple the height of the person in inches by ~13. So a person who is six feet tall (72 inches) would be approximately 900 pixels tall (72 * 13 is 936). Then "reduce the image size" by 50 percent. We aim for a standing person who is six feet tall to display as approximately 36 inches tall when the "measurement grid" on the Graphics page of the Gear Builder) is displayed. Yeah, that's short! But in rigging illustration the focus is usually on the gear rather than the people (and you can resize the people when they are on the workspace)

For tripods, create an image that is 900 pixels tall and "reduce the image size" by 40 percent. This results in tripods displaying as approximately 43 inches tall when the "measurement grid" on the Graphics page of the Gear Builder) is displayed.

After determining the appropriate size of the gear image in pixels, resize the image in Photoshop. Note that before we resize the gear, we save a backup file or convert the Gear layer in Photoshop to a Smart Object, so we don't lose detail if we ever want to increase its size.

8. Export the image as a png file

This step saves the image in the png format. This format is required by vRigger's Gear Builder and preserves the transparency.

When you load the main image in the gear builder, you are asked if you want to create the icon image based on the main image. That is the best choice in almost all cases. However if you want to specify a different image for the icon, the following steps create a 32x32 pixel icon file. The icon file can be in either the bmp or png format, however it must be on a white, rather than a transparent, background. This will happen automatically if you save the image in the bmp format.

Rename the Photoshop file so you don't accidentally overwrite the main image with the smaller icon.

Now resize the image to a maximum of 32 pixels.

Next, resize the "canvas" to 32x32 pixels. This changes the overall size of the image without changing the gear's appearance.

You should now have a 32x32 pixel image of your gear. The image should not be distorted (which will happen if you confuse the Image Size, Alt+Ctrl+I with the Canvas Size, Alt+Ctrl+C).

10. Create the gear in vRigger

Watch a video that explains how to create your own gear.